Replacing their distinguished G-Max AS-03, General launched its new tire under G-Max AS-05 in May 2017. General G Max AS 05 Tire is an ultra-high performance all-season tire that promises to offer a fantastic experience to the drivers. Whether you want it for your sports car or your luxury sedan, General is ready to serve you with their contemporary G-Max AS-05.

General G-Max AS-05 is loaded with intelligent features. One of them is Smart monitor tread indicators which indicate visually when the tire needs to be replaced. G-Max AS-05 is also adorned with the General’s Visual alignment indicator to tell when the alignment has to be fixed. 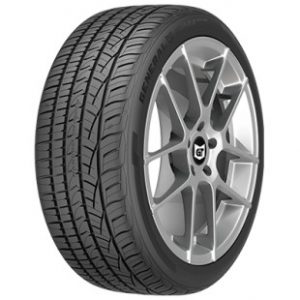 General G-Max AS-05 comes with unique GripTread technology and an asymmetric tread pattern which helps in boosting the traction on wet/dry pavements. These features also help in providing more responsive handling and cornering grip. The G-Max AS-05 is designed to give a longer tread life with General’s StabiliTread Technology. This technology also enhances the tire’s tread wear by creating a larger contact patch.

G-Max AS-05 comes in 54 sizes ranging from 16-22 inches with a W-speed rating. The list of all the tire sizes offered by General is given below.

General’s contemporary G Max AS 05 tire will give you a comfortable and quiet ride. AS-05 is better than its predecessor, AS-03, in terms of traction and cornering stability, making it a top dog in the market. It has a 500 UTGC rating, and we think it can compete well with its contemporaries like Michelin AS3 Plus, Continental DWS06, and others.

Talking about the overall performance of AS 05, it is highly recommended by us. It can be considered one of the best ultra-high performance tires. If you love driving and are looking for outstanding traction and cornering performance, then AS 05 should be on your list. G Max AS 05 can go with several vehicles mentioned in the following column.

What Vehicles Will General G Max AS 05 Tire Fit?

The General G-Max AS-05 ranges from approximately $98 and goes higher depending upon the tire size and other factors. You may occasionally get discounts, rebates, and special offers on this tire as decided by the manufacturer.

General G Max AS 05 Tire comes with a 45-day or 2/32 inch of wear customer satisfaction trial assurance. General also provides a Tread warranty of 50000. Along with this, a 6-year warranty is given on material and workmanship. This also includes first-year or first 2/32 inch free replacement. A prorated amount is given for the remaining period or down to the final 2/32 inch tread depth.